I've recently gotten involved in the legislative process in Oklahoma after a new personhood bill has been up for debate.  I've been conflicted in this issue as it is mainly touted as an anti-abortion bill, stating that life begins at conception and grants all the rights of citizenship to a fertilized egg.  It's the consequences that this statement has on assisted reproduction that have inspired me to get involved.  As someone who has faced enormous challenges in trying to create a family, the idea of supporting the termination of healthy pregnancies is unthinkable.  However, I have also always had difficulty with the notion of government dictating the availability of medical interventions.  Regardless of stance on these issues, I wanted to share the story of how my family came to be.  I hope that it can provide insight into this debate, hope for those struggling and grattitude for those blessed with healthy kids.

During my first pregnancy, when our son Jackson was diagnosed with a chromosomal translocation, we discovered that we carried the mutation and our future kids might also be affected.  Initially, we didn't know exactly what the odds were of passing it on.  After living through the struggles that Jackson had and ultimately facing his death, we began to pursue our options for ensuring that our future children wouldn't face the same disease.  Our high risk OB introduced us to the concept of preimplantation genetic diagnosis.  Through in vitro fertilization, one cell is biopsied from an 8 cell embryo and the DNA is tested for specific diseases.  Because, the test is done on only one cell, the number of tests that can be done is limited to those for which the embryo is at risk.  At the time, the closest reproductive clinic offering this procedure was 3 hours away in Bedford, TX.  The genetic testing itself was only offered in Chicago, but the Bedford clinic could partner with the Chicago facility for the test.  It was through the interview process with Chicago that we learned we actually had a 75% chance of each of our future children being affected as Jackson was.  We completed our loads of paperwork and prepared our bank account for a massive hit, then began the process.  I was still completing my pediatric residency at the time, was in an emotionally sensitive state and wasn't ready to publicize our newest adventure.  Trying to keep this process a secret, travel several times per month to Bedford for appointments, run to the local reproductive clinic for lab draws and ultrasounds multiple times per week and get daily injections with a resident's schedule was quite a trick.   Several times while on call in the hospital, my husband would come up to "bring me dinner", when in fact, he was giving me shots in the call room.

We finally made it to the day of egg retrieval.  They were able to harvest 30 eggs, of which, 27 successfully fertilized.  My mother was waiting in the wings and took on the task of flying our 27 embryos in a portable incubator to Chicago for testing.  As predicted, 21 of the embryos had the same translocation that took Jackson's life.  Six healthy embryos made the journey back from Chicago with Nana.  One did not survive the testing and transport, which made us realize how utterly amazing it is that any of them survive at all.  The following day, one embryo was transferred to me and the rest were frozen.  Then, we wait....
Against advice, I took a home pregnancy test which was POSITIVE!  My blood test later confirmed this and 38 weeks later, healthy, 7lb 13oz Carter made his arrival.  Two days later, I was finally able to bring a baby home.  After some initial paranoia that something bad could happen to my perfect baby boy, I was able to relax and let him just be a normal kid (for the most part). 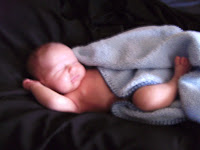 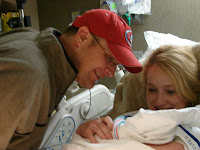 Fast forward two and a half years, and the baby bug is creeping back in.  We decided it was time to try for another baby.  We signed our paperwork, paid our money, started the shots then came to an unusual predicament.  Because the genetic testing that had been done on the embryos also included sex chromosomes, we knew the gender of all of our embryos.  This practice has changed and is no longer revealed to families in our particular clinic.  We had the option to choose which embryo to use next.  After much debate, we picked the one with the best rating.  (Embryos are rated based on microscopic appearance).  It was a boy, whom we named Wyatt Kingston Cook.  The transfer went well, and my home pregnancy test was positive.  The nurse from the clinic called with my blood test and said it was also positive.  I wasn't surprised, since our first transfer had gone so well and our issue really wasn't infertility.  Two days later, I had my blood drawn again to check that the hormone level was rising appropriately.   I had just sent my husband out for pizza when the nurse called with the results.  "I'm afraid the level hasn't risen.  This is most likely a biochemical pregnancy."  What!?  I was completely taken off guard.  I assumed positive is positive.  A biochemical pregnancy is one in which your blood hcg levels are elevated, but no pregnancy is confirmed on ultrasound.  Call it what you will, I felt like I had miscarried my precious son.  We had imagined our two boys playing, fighting, being coached by Dad.  Carter was sitting on the couch with me when I got off the phone.  Through my sobbing, this precious two-year-old boy was stroking my hair, saying "You're OK, Mommy.  You're OK."  Over then next weeks, we pulled it together enough to try again.
Our next frozen embryo transfer cycle was approached more cautiously.  Out of guilt and concern that I had done something wrong the first time, I sat on the couch and worked on needle point.  For those who know me, this was quite a change from the lifting, sawing, and building that I like to do.  We didn't name this embryo, but we knew it was our first daughter.  After the transfer, I started taking two home pregnancy tests per day and was obsessing over how dark the lines were.  Positive, positive, positive.  My blood test was also positive, but this wasn't the reassurance I needed.  The second test was done and the phone call with results confirmed the worst.  Another lost pregnancy.
Up until this point, I had insisted on only transferring one embryo at a time.  After our experience with Jackson and my fear of ending up back in the NICU with premature twins, I wanted to avoid any chance of complications or health problems.  However, after the two cycles that were unsuccessful, I was ready to increase our chances, or at least use our last two frozen embryos so we could move on to another fresh cycle, since that was what worked with Carter.    We once again signed our papers, paid our money, took the shots and then transferred two female embryos.  My home tests were positive; REALLY positive.  The lines just kept getting darker.  My blood test was crazy positive.  The repeat test was more than doubled from the first level.  I couldn't wait for the ultrasound to confirm my notions that we would be buying a van to accommodate our twin baby girls.   The day finally came, and the ultrasound showed two sacs but only one baby.  It was bittersweet to know what could have been, but also to know that we would finally get a precious baby girl.  After some initial complications, we were able to settle into another normal, healthy pregnancy.  37 weeks later, healthy, 8lb Cassidy made her arrival. 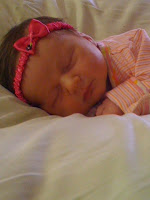 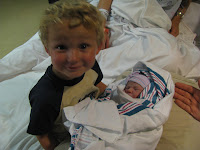 After traveling this journey, I have been amazed at how many people have also had trouble with infertility and miscarriage.  It's often not discussed  because it can be so painful and isolating.  When you desperately want to be pregnant, all you can see are pregnant women surrounding you.  You overhear women talking about "accidentally" getting pregnant, and you want to scream.  I hope that in sharing my story, other women are encouraged to confide in each other for support.  I hope that others feel less isolated and less broken.  I hope that women are encouraged to seek help, whether medically or emotionally.  I also hope, that everyone who wants children can have to opportunity to use the resources available to acheive that goal.  My personal faith tells me that God works through medicine and science to bring miraculous blessings.
Posted by Doctor Mom at 1:26 PM